Is Rio Excited About the Olympics in 2016?

Here’s the thing. A few days back was the one-year-to-go point for the Rio Olympics. The Olympic committee seemed pretty confident that most things are on track for the games. Some of the venues are ready now. Some are almost ready. From what I read there only seemed to be one venue that was really struggling to meet deadlines.

But we still have a year to go. Who can forget the images from Greece before the Athens 2004 games where it seemed that venues were still being constructed days before the events were to start?

But what I find really funny is how the media – in Brazil and globally – are all saying that nobody is looking forward to the games in Brazil. Ticket sales are low. People are worried about the economic situation. The Guardian even went so far as to suggest that people in Brazil are still upset about Germany thrashing Brazil 7-1 in the World Cup last year.

What is worth remembering is that this happens before every Olympic games. Take a look back at London. Perhaps I’m biased because I am British, but it was one of the most memorable Olympic events ever in my opinion. From the amazing opening ceremony to the way the volunteers changed the way the entire city operated. It was a time to remember in the UK. Ask most people in London about the Olympics in 2012 and they will have fond memories of a month when people were friendlier than usual – there was an improvement in the way the entire city functioned and people enjoyed it.

But a week before the 2012 games it was all different. I wrote about it at the time in the Huffington Post. The press were wailing that there was no security in London, that missile launchers were being erected on buildings, that bus drivers wanted to strike, that the tube would not run, that the Olympic bus drivers had no idea how to find the stadium, and that the budget was out of control… the 2012 Olympics was generally hated by the media.

That article was published one week before the 2012 games began and my point was generally to say, “look let’s get behind this now because the whole world is watching London.”

What response did I get? Almost 100 comments on the article and every single one saying what a complete tosser I am for suggesting this. Every comment complained about the Olympics in London.

Spin forward a week to the opening ceremony and every Brit was laughing at the Queen with James Bond, Mr Bean, singing Kinks and Beatles songs. Suddenly everyone loved the fact that the entire world was watching Britain and enjoying it. Suddenly people felt proud of being British.

But this hasn’t happened in Rio yet. In fact I expect it will not happen until the opening ceremony because until the event is really underway, it’s not “real”, it’s just a future event that could always be a disaster. At least that’s what the press tells us.

So I for one am not listening to a word about how the Brazilian psyche has been so disturbed by Germany’s goals in 2014 that it is now impossible for them to enjoy the Olympics. Or that any questions of economics will make people enjoy sport less.

The sports pages are full of so much garbage. The bottom line is that Brazilians are going to welcome the Olympics to Rio next year and I hope I’m there to enjoy it with them. 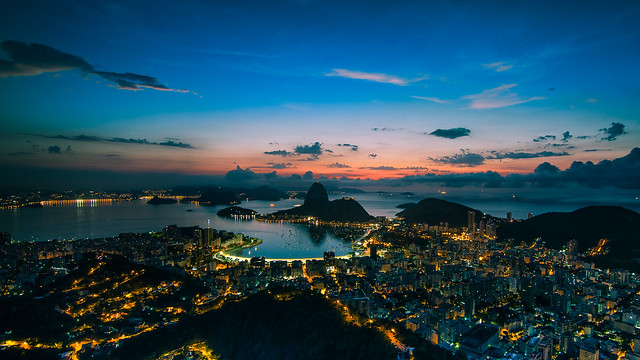 Living at the Kings Arms, Ealing

The video below is from December 2010 outside the Kings Arms pub in Ealing, west London. I was leaving London for São Paulo, but I had about a week left between leaving my home near the pub and leaving the country – so I lived in the pub for those final few days in England.

I’ve stayed there again on a couple of visits back to London and I’m happy to say that I’ll be there for the duration of the London Olympic games in July and August… I have my flights booked and three weeks living in the pub.

What could be better than London in the summer, with the Olympics going on, and home being a London W5 boozer?

The life of an umbrella

Being British I know how useful it can be to have an umbrella in your bag, and though Brazil is a lot hotter than England, São Paulo in the summer gets a lot of tropical rain – it may be warmer, but it is just as wet.

For years I had always purchased umbrellas in an emergency. It rained, I wasn’t carrying one, so I would dive into any shop selling them and grab one – usually at a price that had doubled the instant it started raining. But these emergency umbrellas were never all that good.

So the last time I was in London, I invested over £70 in a nice solid German umbrella with a lovely wooden handle at Smith’s – the store near the British museum that has been selling umbrellas for over 100 years.

It was great, the best umbrella I have ever had, but on Tuesday I was on my way out and checked the umbrella basket on my porch only to find it had been snatched – someone had reached into the porch at the front of my house to steal my umbrella! It was pouring, so I had to grab my wife’s ‘London 2012‘ umbrella and use that to get to my meeting – a very masculine shade of pink…

When my taxi arrived at the meeting venue, I left the London 2012 umbrella in the back of the car – so I had my umbrella stolen and I lost one soon after. My wife bought me a cheap black one the next day just in case I lose it again.

The thing that is really annoying is that the opportunist who stole my umbrella, just because it was raining, probably has no idea that they have a handmade European umbrella costing about 15 times (over R$200 for an umbrella is outrageous) what a regular umbrella in Brazil would cost. At least I had an appreciation of it every time I used it and remembered visiting Smith’s and choosing that particular one.

It’s a good thing I am visiting London again next week. I’ll replace the London 2012 umbrella, but I’m undecided about getting another expensive one. If I bring it back to Brazil with me, I might leave it in the taxi from the airport…

I’ve visited India many times. I’ve spent time in hotels and offices that could be anywhere in the world, yet I have also seen how the slums sit cheek by jowl with the new hi-tech India. There is often a sense of chaos in India and a relaxed attitude to time reflected in the often-repeated joke that IST really means ‘Indian Stretchable Time.’

But in all my experience of India, I have found that world-class companies offering first-rate goods and services really do exist. And why not? India is one of the BRICs… the countries that will lead the 21st century. So who can explain the disaster of the build up to the Commonwealth Games?

Teams are arriving to find they can’t live in the accommodation provided because it’s flooded or unfinished. The bridge linking the main stadium to a car park just collapsed, seriously injuring several labourers. Athletes are already pulling out citing security risks.

India can do far better than this in the world of business, where Indian companies compete with the best. So is the failure to organise the games because of endemic corruption and favouritism in the political classes? The local media in Delhi is reporting that vast sums of money allocated to the games has just vanished.

Where did it all go? Who is going to answer for the chaos? And when will India allow competence to rise above nepotism when managing major events such as this?

One look back at China in 2008 shows how a major athletics meeting can be run with precision and efficiency – I expect London 2012 to be a bit more relaxed than China, but if I was Indian today I’d be filled with shame because the world is watching and waiting as disaster reigns.

You fascists are bound to lose

I spent hours this evening editing a video about the BNP. I hope you like it.