Coffee – from the berries to the cup down on the farm

My house is located in rural São Paulo. In fact, it is so rural that from my windows I can see a mountain range and lots of coffee growing up the side of the hills. This photo is from one of the nearby hills looking back at the town in the valley. 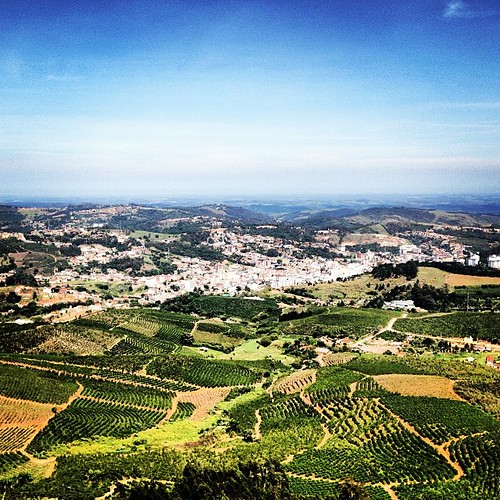 Although I am surrounded by coffee and I can buy the local coffee in the shops nearby, I had never seen a coffee farm up close – until yesterday.

An agronomist, Jonas Ferraresso, working at the Boa Esperança coffee farm in Serra Negra noticed me tweeting about the area and he said hello. We have talked on and off on Twitter for a few months now and he eventually asked if I would like to have some coffee at the farm. So I went over and he gave me a tour.

This farm is very close to the town centre. There is no need to go on dirt roads to get there so it only took me 5 minutes to find him. Jonas showed me around the farm by car, because with over 350,000 coffee trees it would take a long time to walk it!

There are about 20 people always working on the farm because the coffee trees need to be looked after all year round – pruning and fighting bugs. Then there is the harvest from about July, which can take around three months and needs around another 60 people.

In many Brazilian farms like this the harvest can only be done by humans because the trees are planted on steep hills. This also means that the trees need to be limited to about 2m tall. Where a farm can use mechanised harvesting tools they can manage without the extra employees, work about a hundred times faster, and do the harvest in several waves – only ever picking the ripest berries rather than just picking everything.

I was really interested to learn about some of the different coffee varieties and the difference between a premium coffee and the cheap instant stuff you might find in a jar of Nescafé. I don’t buy instant coffee anyway, but after visiting a farm and seeing the real stuff I don’t think I ever would again.

The best thing was when he said that I could take some coffee home – straight from the farm. But the coffee he had for me was still berries covered in their skin. First Jonas put the beans in a roaster – we roasted them at 200c right there in the farm.

After roasting Jonas ground the beans for me. He said that it’s preferable to wait about a day after roasting before grinding, but as I don’t have a grinder at home he just did it immediately.

I’m grateful to Jonas for showing me around. Something many of us miss when living in cities is the connection between products in the supermarket and the farm they came from. I loved it that I saw the berries being roasted, then ground, and I went home with a bag of coffee that was ready to use and smelled fantastic!

The final meal at Café Rouge

What is it that Café Rouge does not understand about service?

Last Friday I visited their Manchester branch (next to the National Football Museum) for breakfast with my family. They had all travelled up from Hampshire to support Team GB in their first Olympic football game – me and my wife had come all the way from São Paulo in Brazil for this game.

We entered the restaurant and waited, and waited, and waited. I eventually went to fetch menus, but found they were the wrong menus – only featuring lunch items. Us having the menus finally meant the staff gave us a correct menu, and the waitress apologised and said she was running the entire café this morning all alone.

I asked the waitress, who just brushed me off with a ‘it’s on the way’ – I said in the mildest possible way (given that I was now fed up with this café) that if they do not serve us in the next few minutes I’m leaving and I don’t expect a bill for the coffee.

Soon the food was being served and all was well. I asked for the bill and paid in cash immediately. It came to £48.10 and I left £48.20 – really not interested in giving a tip for such poor waiting service, then the change came back all in coppers.

So the manager decided that because I was a difficult customer, she would be difficult when giving change.

Well I can see that Dana was my server. Now let’s see if Café Rouge has anything to say about the way their manager behaved? I’m hoping they can tell me how this reflects great British customer service and what visitors to the country should expect.

Then again, whatever they say I know I’m never going back. Or my family, or my friends, or anyone else who reads this.

Costa and the Chimps

Who gave the green light to the first TV ad campaign by Costa Coffee?

I can fondly remember the PG Tips ads of the 70s, featuring Chimpanzees, but I thought advertisers had realised long ago that using primates in commercials was not cool?

Clearly nobody told the people at Costa as they have dozens of them attempting to make coffee in this ‘hilarious’ ad. Is it just politically correct to think that using captive animals in TV ads is just a bit strange these days?